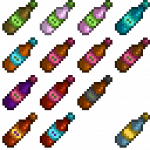 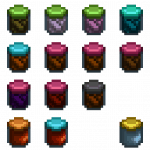 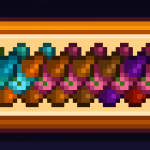 “More Than Forage” changes the categories internally for different forage items to allow them to be refined in the Preserves Jar / Keg.

The mod is split into five independent parts.
Each can be installed separately from eachother, but the BAGI Patch won’t really do anything on its own.
The first four require Content Patcher; the last requires Better Artisan Good Icons.

~ Fruit ~
Hazelnuts and Holly are now internally considered Fruits and thusly can be made into Jelly or Wine.

~ Flowers ~
Daffodils and Dandelions are now internally considered flowers.
If you have Artisan Valley and/or Farmer to Florist, for example, they should be able to be refined at various machines.

~ BAGI Patch ~
If Better Artisan Good Icons is installed, the BAGI Patch will add special icons for the Juices/Pickles/Jellies/Wines added by any of the other More Than Foliage parts you have installed (except Flowers).
Wines and Juices are distinguished by the middle of the label. Purple means Wine. Green means Juice.
As for colours on the labels and lids:
Spring: Green
Summer: Yellow (Unused)
Fall: Orange
Winter: Cyan/Aqua
Mushroom: Pink
Cave Carrots: Grey

— But Why, Though? —
Vegetables: It felt weird to me that certain things couldn’t be refined due to arbitrary gameplay designations. Balance may be affected, but I feel better about the whole thing, now.
Fruit: I figured I might as well round things out as best as possible. The changes could be contentious, so these are separate.
Flowers: A flower is a flower, even if pedestrian.
Mushrooms: Here’s the thing about vegetables: It’s a culinary term, not a taxonomical one. Mushrooms are considered a culinary vegetable. Therefore, they are such in this, as well. That’s also something people will have differing opinions about, so it’s separate from the Vegetables mod part.

— Extra Notes —
This is my first Stardew mod, so I’m sorry if anything is incorrectly done or I don’t catch certain mistakes.
The mod has only had a cursory test so far, but nothing seems totally broken (I hope).
The affected items still show up as Forage on their tooltips, but refining into Artisan Goods works fine.
Forage flowers still can’t be used to make honey. That may be a later mod.
Sap isn’t affected, but it’s more a resource than anything, and I wouldn’t know how to categorize it anyway.
The bare minimum has been changed to ensure maximum compatibility.
The empty gold containers in the mod images are unused and not even in the mod. I just added them to fill space and act as design examples.

— Install Details —
It’s the standard procedure.
1. Install SMAPI
2. Install required mods
3. Extract this mod’s zip into the [ < your steam directory >/steamapps/common/Stardew Valley/Mods ] folder so that five new folders are present.
4. Delete any of the folders you don’t want.
5. Run the game using SMAPI