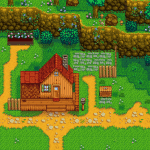 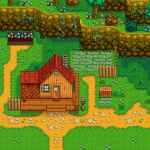 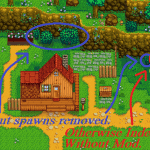 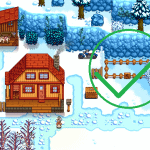 Removes those pesky indestructible bushes that are classed as ‘buildings’ in the game files for Immersive Farm 2 REMASTERED.

No More Indestructible Bushes For SVE Immersive Farm 2
This simply removes all the indestructible bushes found around the farm; that are technically not bushes in the map’s .tbin file but are actually “buildings”; meaning; they are not actually ‘bushes’ at all; but objects that are immovable and indestructible; even by other mods that otherwise would let you get rid of bushes.

The most notable effect of this mod, is that the area north-east of your shipping bin, that would
otherwise, be a complete waste of space; now makes for an absolutely perfect location in the building of a shed.

Here is an image with all the “bushes” that were technically ‘buildings’ that could get in the players way; All now completely and utterly eradicated.

I also removed the spawns of the five ‘normal’ bushes that can appear directly behind the players house.

Please Note: This won’t remove these five specific ‘normal’ bushes if they have already spawned on your save.

If that’s the case, I cannot remove them.
Take a look at these other mods for solutions to that problem:
Destroyable Bushes
Reset Terrain Features
But after removing them one way or another, they will not respawn with my mod installed.

Apart from the five mentioned above;
This mod does not affect the spawns of any of the other ‘normal’ spawning bushes that are destroyable by other means, and other mods.

Requirements
This was made for Immersive Farm 2 that comes with Stardew Valley Expanded.
It might also work for the None-SVE version but I haven’t tested and I’m not even sure if that standalone mod, in itself, is up to date.

Installation
Go to \Stardew Valley\Mods\[CP] Immersive Farm 2 Remastered\assets and replace the Farm.tbin file with own Farm.tbin file found in my download. I would avoid using a mod manager for this specific installation and afterwards if you are using an MM, tell it to ‘use newer file’ if it prompts you there has been an outside change.

This mod should not at all affect or corrupt your save file.
This only modifies/ effects the world tiles that are loaded separately ‘behind’ your save.
Meaning it is relatively safe to install at any time during your play-through.

Credits:
LilyMods
This content was uploaded by website visitors. If you notice any mistake, please let us know.
What is this mod use for: